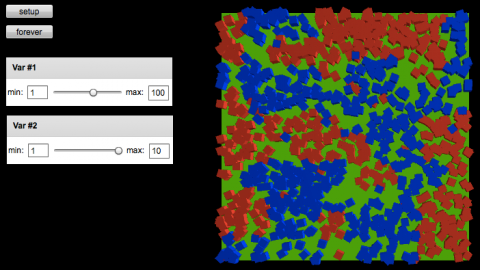 Your challenge is to add more types of turtles and see the impact of multiple groups on neighborhood formation.  This may entail adding new breeds or types of agents.  You can take the model further by giving different agents different thresholds for moving.  Design an experiment to see how individual preferences effect global pattern formation under these conditions.  Submit a picture or a video of your entry and a link to your model in the comment section below by the end of the month! We will collect project links on April 30. 2017  and our guest judge Su Gibbs will review the entries and post the winner.