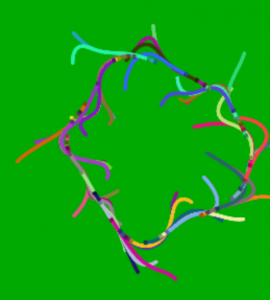 Review the CAST at the board showing each circle and how zooming works.

Using the CAST ask students what they see at the different scales in the Walk & Turn model.   Have students answer and write notes on their individual CAST sheets labeled with “Walk & Turn”.

What happens at the global scale (spiral pattern) was not predictable even though we knew the simple rules that agents were following at the local scale.  This is a hallmark of a complex adaptive system.