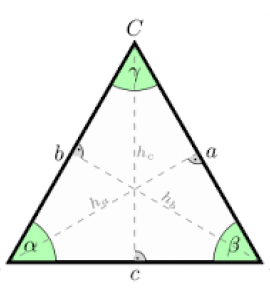 1. Tell the students that in “TryAngles” each student will play the role of an “agent” following a “simple rule.”

2. Discuss what an equilateral triangle is (each side is the same length, the angles at the vertices are the same)

3. Explain the simple rule. “Each person will pick two other people without letting the group know who was picked. Do not tell anyone who you picked. When I say “GO” you must position yourself so you and the two other people that you secretly picked form an equilateral triangle” Also make sure you stay within the perimeter marked. Ask to make sure every one understands the rule. (Review what an equilateral triangle is and how three points define the vertices of the triangle.)

4. Pick two students to demonstrate the goal with. Show how as they move, you must move to a position in such a way that the three of you form an equilateral triangle. Ask the students to predict what will happen when you say go.

5. In the space scatter everyone then give them a little time to select the two people they will form TryAngles with. Remind them not to tell anyone who they selected. Say “Go” and watch what happens.

6. After a few minutes, say “Stop” and ask the students to look around. What do they see? What was the experience like from their perspective? Was the result what they predicted?

7. Ask if any patterns or formations emerged, and if so, what were they?

8. Ask if the same patterns would emerge if we played again? If we chose different people? If we scattered differently? What would be similar and what would be different?

9. Play another round and see if the same pattern(s) result.

10  Pick out a student and ask what factors determined his or her position. Usually students will say it is the position of the two people they picked (only). Then ask them what determines the position of the two people they picked and then pick out more people. Following one of these links you can show how some people very far removed from you are actually influencing your position. Also sometimes the chain of influences comes all the way back to the person you started with. This is an example of a feedback loop in which the output of a system becomes its input.

Return to the computers and show the TryAngles model in StarLogo TNG. What do they see? Are there different patterns ? Are they getting a different understanding of the system by seeing it from this perspective (overhead camera)? Are there patterns that are easier to see from this view? Ask what they think would happen if you disturbed the system by dragging an agent out of its current position. Would the patterns form again? Review some of the features we have seen of complex systems at the global scale: emergent patterns, adaptability, lack of leaders, feedback loops, and influences from afar.