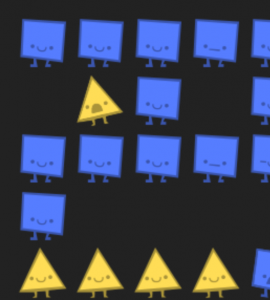 Background:  This is a model of segregation based on an experiment done by a researcher at University of Chicago in the 1950’s named Thomas Schelling. He was looking into how segregated neighborhoods formed.  He modeled people’s desire to live in neighborhoods based on the percentage of the neighbors who were the same as they were in the neighborhood.  For example, a person might think “I could live in a neighborhood where 50% of the people don’t look like me”.  What Schelling found was that if the percentage was greater than a small amount (roughly 35%), segregated neighborhoods formed – even though individuals did not have a strong preference to live in a neighborhood where all people looked like the individual.

Begin with the Mystery Model and have students try to determine what is being modeled, what the sliders represent, and what it might be demonstrating about the real world.  If relevant to your students' experience level, use the decoding model to discuss how to unpack and read the formula for agents to move.  Then, have students do the on-line "Parable of the Polygons" activity.  Finally, have students open the finished Segregation Model and work as teams or pairs to implement one of the suggested changes, or make other relevant improvements to the code.