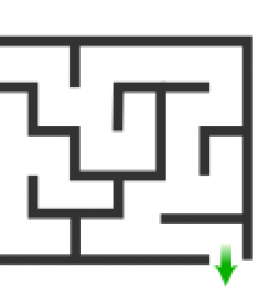 Learning how to build a StarLogo TNG model requires learning how to translate an initial idea of what the turtles should do into a precise description of how they should do it. In this Activity, participants start by drawing a path, then develop a description to help others recreate the path without ever seeing it.  Later we will draw a direct analogy to the conditional instruction used in programming the same behavior.

Give participants a sheet of graph paper and ask that each of them draw a path on the paper. The path should consist of a series of straight lines, connected at right angles. It will be easier for participants to complete the next step of the Activity if they draw lines in the middle of the squares on the graph paper, instead of on top of the preprinted lines. They should also indicate the beginning of the path (with a turtle pointing in the starting direction of the path) and the end of the path.

The goal is to place enough landmarks so that the turtle will follow the entire path from beginning to end.

Conclude the activity by asking the following questions: