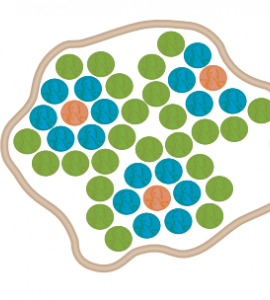 Project GUTS (excerpted from Adventures in Modeling (By Colella, Klopfer, and Resnick)

Did you ever count bacterial colonies growing in a petri dish? Or track the accumulation of money in your savings account? Or watch as mold spread over an old piece of bread? If so, you have observed population growth in action. As populations grow, the change in the number of individuals in those populations over time can be classified in different ways. Exponential growth and logistic growth are terms applied to specific patterns of population expansion. Both exponential and logistic growth are central to many processes and are the basis for many models. Perhaps because of their prevalence, or perhaps because of their “observable” quality, these types of growth are commonly described in biology, mathematics, and even economics courses. However, most textbooks present them in terms of somewhat sophisticated mathematical equations. Unfortunately, those equations do not provide a handy structure for thinking about growing systems from the “bottom up.”

In this Activity, you will get a chance to explore exponential and logistic growth models, relying on simple rules and observable aggregate behavior rather than on specialized mathematical techniques. This Activity approaches system modeling from the perspective of one individual or one creature—much like StarLogo does. The penny model presented in this Activity is an idea model. You might think about the advantages and limitations that this type of model provides for understanding exponential and logistic growth. You might also consider what modifications would be required to create a penny-based minimal model for a system.

In this Activity, each group will “grow” a population of pennies. Start by dividing the participants into three or more small groups. Give one group a small piece of string (about a foot long), another group a medium-sized piece of string (about two feet long), and the final group a long piece of string (a few feet long). If you have more than three groups, you can give out varying string lengths or give two groups the same string length. Have each group form their string into a circle on a large flat surface. Give each group three pennies and have them place the pennies “randomly” inside the string circle. Then distribute the rest of the pennies. Explain the following rules:

Ask each group to begin penny reproduction and to note the number of pennies at the end of each generation. Groups can record either the total number of pennies or the number of new offspring pennies. Later you might discuss the relationship between these two measures. Let each group proceed at its own pace. Groups with shorter strings usually finish before the other groups. As groups finish, ask them to graph the numbers of pennies over time. After some time, stop the remaining groups and have them construct the same graphs.

Compare all of the graphs. Most likely the short-string graphs will illustrate logistic (S-shaped) growth, while the long-string graphs will show exponential (continually accelerating) growth. Ask the groups to discuss the following issues:

Consider running the model again with one or more of the following modifications:

This alteration might be a random method that selects a few pennies to die each generation or it might be a predictable mechanism, such as one that causes pennies in crowded areas to die. Do those modifications change the answers to some of the questions above?

Encourage participants to think of ways that this model might be more or less appropriate for certain systems, but also make sure that they evaluate the model critically and understand its limitations. This Activity is an idea model meant to convey the concepts of exponential and logistic growth. It is not designed to be an accurate representation of any given system. It does, however, demonstrate one way that you can convey the ideas of exponential and logistic growth using simple rules for individuals, instead of using mathematical equations to describe the system level behavior.

This Activity provides a good entry into creating simple StarLogo models. Try programming a model of exponential growth. How is the StarLogo TNG or StarLogo Nova model different from the penny model? A logistic growth model is a bit more complicated to create, but a basic logistic growth model can be built around the concepts of turtles-here and hatch. (Hint: You can limit the number of turtles on any given patch to one and hatch (or create) newborn turtles only if there are adjacent empty patches for the new offspring to inhabit.)

You may be surprised to learn that many researchers have used coins to augment thought experiments. A good place to read more about these kinds of experiments is Schelling (1978).