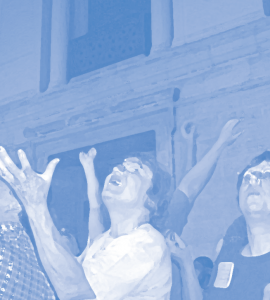 Adventures in Modeling (By Colella, Klopfer, and Resnick)

In the first stage of this Activity, ask everyone to crumple up a piece of (scrap) paper. Pick one person to come up to the front of the room and be the initial member of the population. Members of this population should follow these rules:

Once the members of the audience are all standing at the front of the room, take a look at the graph of the population over time. Ask the participants to reflect on some of the following issues:

Now place a newspaper-sized piece of paper on the ground. Follow the same rules you did earlier, adding one new rule:

Each member of the population must have part of one foot on the paper at all times. Removing your foot from the paper (even for an instant) results in “death” (sitting back down).

Proceed, as in the last experiment, by calling up one initial population member and asking that person to throw the paper in the air. Continue propagating new generations, noting the number of people in the population over time. What happens to this population? Is everyone able to stand on the paper? When the population size stabilizes, discuss the implications of this new feature.

Compare the birth and death processes in this model and the penny growth model. What are the advantages and disadvantages of the two models? When would it be more appropriate to use one or the other?

It is likely that people were cooperating in order to avoid collisions when they were standing close together on the newspaper. How do social factors like this one influence population dynamics? Depending on the paper-catching skills of the people in the group, you might need to adjust how high the population members throw their papers. You might also use throwing height as a variable in the model. For a description of a similar activity and additional explorations, see Byington (1997). Modeling a growing population is one avenue for exploration. You and your students can consider the many different ways to model a single phenomenon and weigh the advantages and disadvantages of each approach.