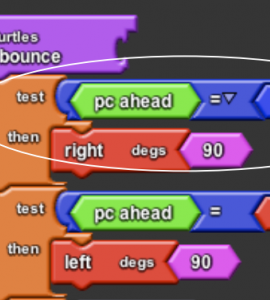 What does a pinball bouncing off of bumpers have in common with a bee using landmarks to navigate back home from a flower patch? Both of these examples are instances of individuals reacting to other objects in their environment. When bees fly back to the hive they depend on landmarks in the environment to reach their destination. A bee might remember to turn left at the large oak tree and fly straight until reaching the creek, where one last right turn will bring her to the hive. Any change in the spatial arrangement of the landmarks can be devastating for the bees. If someone cuts down the large oak tree, then the bees will be unable to react to that landmark and may never reach the hive. Just as the arrangement of the landmarks is important for the bees, the location of the bumpers influences the pinball’s path. In both examples, the spatial arrangement of the obstacles affects the behavior of the individuals. Unlike many other modeling tools, StarLogo enables you to create a system with a spatially meaningful environment in which you can see how the individuals that you create react to their surroundings.

Wrap up the activity by reviewing terms and concepts.