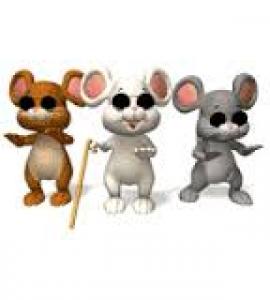 Musicians in an orchestra take cues from the conductor as the tempo changes; students pass notes to each other during history class; football players simultaneously initiate the play as the quarterback calls “hike.” In any multi-agent system, members of the system communicate with one another. Even in systems comprised of nonhuman entities, objects exchange information. For instance, billiard balls “communicate” information about their velocity and direction as they collide.

27 Blind Mice is a compilation of three distinct games designed to engage participants in thinking about different types of communication strategies. In each game, the goal is the same, but the mode of information exchange that participants can use to achieve that goal is very different. In Part One, the participants usually employ centralized or global strategies, in which a small number of people take the lead and organize the others. In the latter two games, the participants’ strategies shift to more decentralized or local methods, in which everyone gathers information only from people in their immediate neighborhood.

RUNNING THE ACTIVITY – PART ONE

Ask each participant to pick a random integer from 1 to 5 and write it on a Post-It note. Tell everyone to organize into like-numbered groups (i.e., all of the 1s together, all of the 2s together, and so on). Do not tell them how to get into their groups. After the groups are formed, ask them to reflect on how they achieved their groupings.

Also, look around and observe the size of the groups. Is the distribution of 1s equal to that of 2s? 3s? and so on? Is this the expected result?

Ask participants to choose another number from 1 to 5 and write it down. The goal is the same as in the previous games: To form like-numbered groups. But this time, you will give the participants blindfolds so that they cannot see one another during the game. Explain that participants can communicate with whispers but not loud talking. Note: Make sure that people who feel uncomfortable being blindfolded do not feel obligated to participate. These people can act as monitors, making sure that other participants do not wander into dangerous situations.

Asking participants to divide into five groups works well if the total group size is between 20 and 30. If your group is significantly larger or smaller, you may want to adjust the number of different small groups accordingly.

Depending on the situation, creatures might use local or global communication strategies. StarLogo models generally incorporate behaviors that are based on local interactions. It might be helpful to think of the turtles in StarLogo as blindfolded, whispering people. Turtles are designed to react to creatures and objects in their immediate local environment. 27 Blind Mice should give participants a feel for the dramatic effects of local communication.

The 27 Blind Mice Activities were first developed by Mitchel Resnick and Uri Wilensky. For an extended description of these and other decentralized role-playing activities, see Resnick & Wilensky (1998).